When you opened this article, your web browser sent a request to this website’s server (which is basically just another computer in a different location) asking for this page, and the server sent back the words you’re reading right now.

No matter what you’re doing online, a broadband connection makes it possible for you to send and receive data in the form of web pages, videos, emails and more. The same thing goes for the content you see on TV — it all relies on technology that transmits data to and from your home.

Understanding what technology is available in your area can make it easier to shop for the right internet speed and TV service — and determine how much you should pay for it. Digital subscriber line, or DSL for short, is the most popular technology in the world for delivering digital data. In 2015, the U.S. Census Bureau estimated that about 21% of the U.S. population relies on DSL to get internet and TV service.

DSL transmits an internet signal through regular phone lines, but it’s not the same as the noisy, outdated dial-up system you may be thinking of. If you’re looking for some nostalgia or you’re just not sure what that is, listen below!

DSL uses existing copper phone lines to transmit internet and TV signals. A copper phone line is like a highway with four lanes. The voice we use in our phone conversations only travels through the right lane, but about 30 years ago, technology was developed that opened up more lanes to transmit digital data. Now, telecommunication companies can deliver high-speed internet and TV service over a phone line.

Next time you’re driving down the road tracing telephone wires as they pass your window, consider that much of our present-day connectivity still relies on this decades-old infrastructure. One challenge with copper wires is that the farther they travel, the weaker the signal inside becomes. This loss of signal strength is offset with repeaters or boosters that amplify the signal as it travels from pole to pole. Cable technology uses a coaxial cable to deliver internet and TV service. Coaxial cables are similar to the copper phone lines described above but they use a different outer material that allows the signal to travel further without needing to be amplified as much along the way.

Like copper telephone lines, coax cables work by allowing an electrical signal to travel through the copper part of the cable. When the signal reaches your home, a modem takes the electrical signal and turns it into a digital format that can be understood by your devices. Yes, that means that your favorite TV show’s audio and video is sent to your house as nothing more than a simple electrical signal.

What is Fiber Optics? Fiber optics uses light, rather than an electrical signal, to transmit data along thin glass strands that are bundled together into a cable. This means that information can travel at close to the speed of light. Unlike the copper wires used by DSL and cable technology, fiber optic cables can carry a signal at full strength across incredible distances without any boosters along the way.

Fiber optic technology emerged in the telecom industry in the 1970s. In a little over a half-century, it’s become a game changing technology that bypasses many of the limitations of cable and DSL. For now, the infrastructure required for fiber networks is limited to certain regions in the US, but the percentage of broadband connections in the US that are powered by fiber has grown from 5.4% in 2010 to 13.79% in 2018.

Fiber optic cables can already transmit enormous amounts of data, but the future is even brighter. In 2014, Danish researchers showed it was possible to transmit data at speeds up to 5.4 terabytes per second, which is 4,300 times faster than the fastest commercially available internet in the US. What does that really mean? Well, you could download all nine Star Wars® films in Blu-ray Disc™ quality in a fraction of a second. Of course, just because it’s possible in a lab doesn’t mean it’s ready for the real world yet, but this provides a good sense of fiber’s potential over the next few decades.

Differences Between DSL, Cable and Fiber 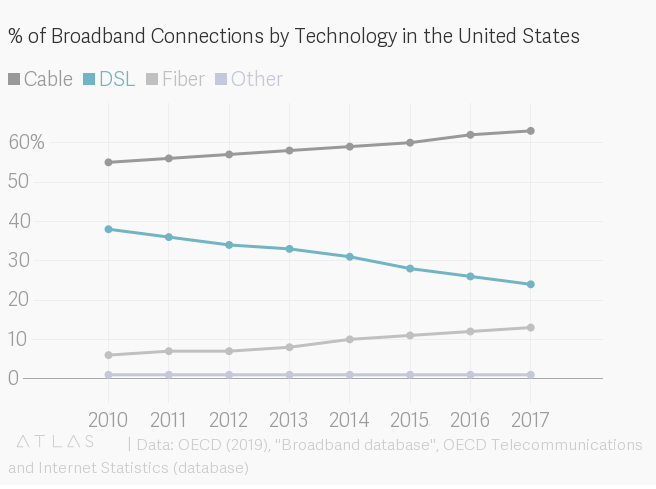 Which Technology is Right for You?

The answer to this question largely will depend on where you live. If you live in an area where you can choose between two or more of these technologies, then a key factor in your decision will depend on your internet and TV usage.

If you use the internet mainly to browse and send emails, a DSL connection may be the best and most affordable option. But if you upload a lot of video, stream movies and play video games at the same time, then a fiber connection — if it’s available — could be a better fit.

If you’re still unsure of which way to go, the Federal Communications Commission (FCC) provides a guide of minimum recommended speeds for different types of browsing. Review the guide to make an informed decision about how to get the internet and TV speed you need for a price that works for you.

CableDSLFiberinternet
You must select at least one option.