Hallmark Christmas movies are as much a part of the holiday season as stockings, gingerbread, and eggnog. This season there’s plenty more to unwrap, with 40 new original movies premiering across two networks: Hallmark Channel and Hallmark Movies & Mysteries.

Missed a premiere? Don’t worry, they all air multiple times through the end of December, and you can easily find upcoming showtimes on HallmarkChannel.com or in their app. Here are some of our favorites in this year’s lineup. 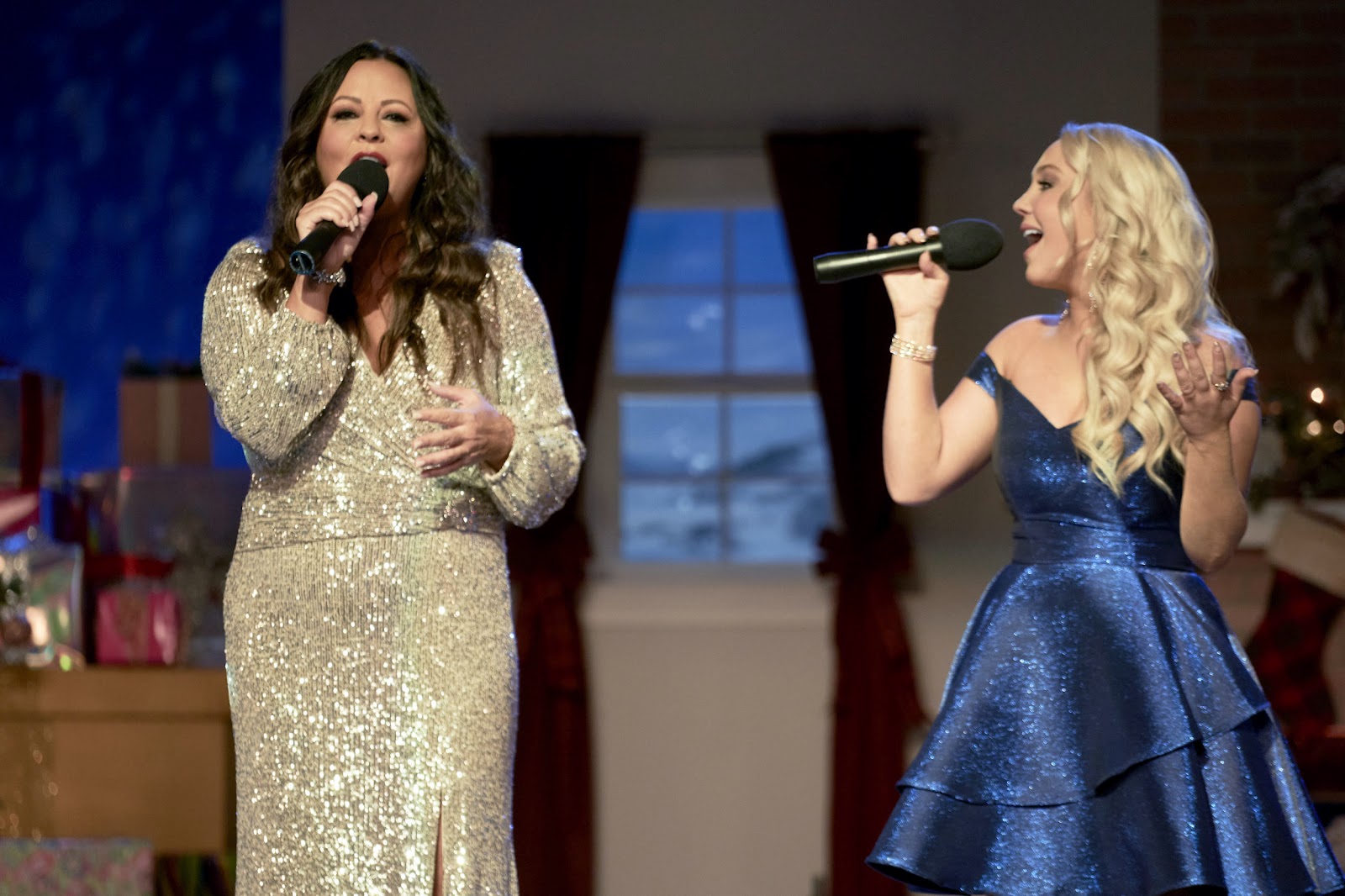 For country music lovers, this new movie from Hallmark Channel is a holiday must-watch. This country twist on A Christmas Carol has guest appearances from celebrities with real-life Nashville ties, including Wynonna Judd, Sara Evans, RaeLynn, Kix Brooks, and Kimberly Williams-Paisley.

Vivienne (Jessy Schram) is a workaholic television producer putting together a country music-themed Christmas special. It all becomes more than she bargains for when her childhood sweetheart Gavin (Wes Brown) shows up as the manager of the special’s headliner Belinda (Evans). On the verge of accepting a new job in LA, Vivienne begins to question her future as she’s visited by the ghost of her recently deceased mentor Marilyn (Judd), the Spirit of Christmas Past (Brooks), and the Spirit of Christmas Present (Williams-Paisley). Which path will she choose: her career or a chance at love? 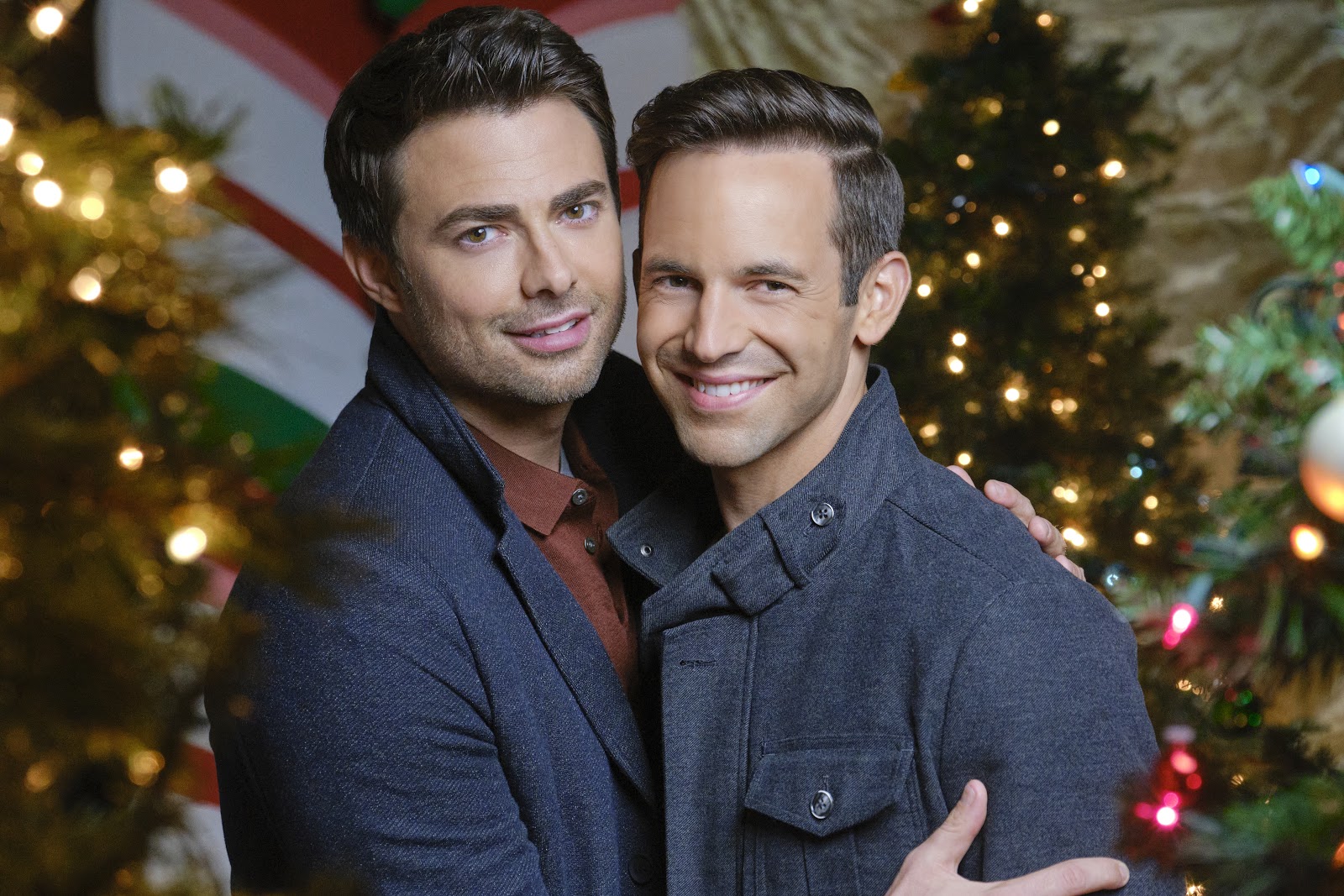 The Christmas House is getting early buzz this holiday season because it’s Hallmark’s first movie featuring an LGBTQ+ couple. Mike (Robert Buckley) and Brandon (Jonathan Bennett) are brothers headed home for Christmas, summoned by their parents Phylis (Sharon Lawrence) and Bill (Treat Williams) to revive some of their family traditions.

Brandon and his husband Jake (Brad Harder) are awaiting a call about the adoption of their first child, while Mike reconnects with his high school sweetheart (Ana Ayora). Buckley, who’s best known for his role on One Tree Hill, co-wrote and executive produced this heartwarming story of a family working through some difficult decisions.

Christmas in Evergreen: Bells are Ringing

This season we get the fourth movie in a series set in the fictional town of Evergreen. We won’t give away the plot since it builds on a previous movie in the series, but let’s just say it picks right up where the last movie left off.

A Hallmark Christmas staple, these movies feature the same core of characters in each one, usually with an out-of-towner or two thrown in the mix. From the iconic old red truck that now shows up in lots of holiday décor to the magic snow globe and a resident who looks just like Saint Nick, this series is the epitome of Hallmark at Christmastime. If you haven’t seen the first three movies in the series, you can catch up when Hallmark airs them multiple times in November and December. Check out the links below for showtimes.

Hallmark has also started branching out to include a Hanukkah movie or two. This year, a new original premiere in the Hallmark Channel lineup even includes a familiar face for many: Ben Savage of “Boy Meets World.”

Christina (Mia Kirshner), our heroine, gets back a DNA test and learns she’s Jewish. As she heads down a path of self-discovery over eight nights, she discovers a new family and an unlikely romance. 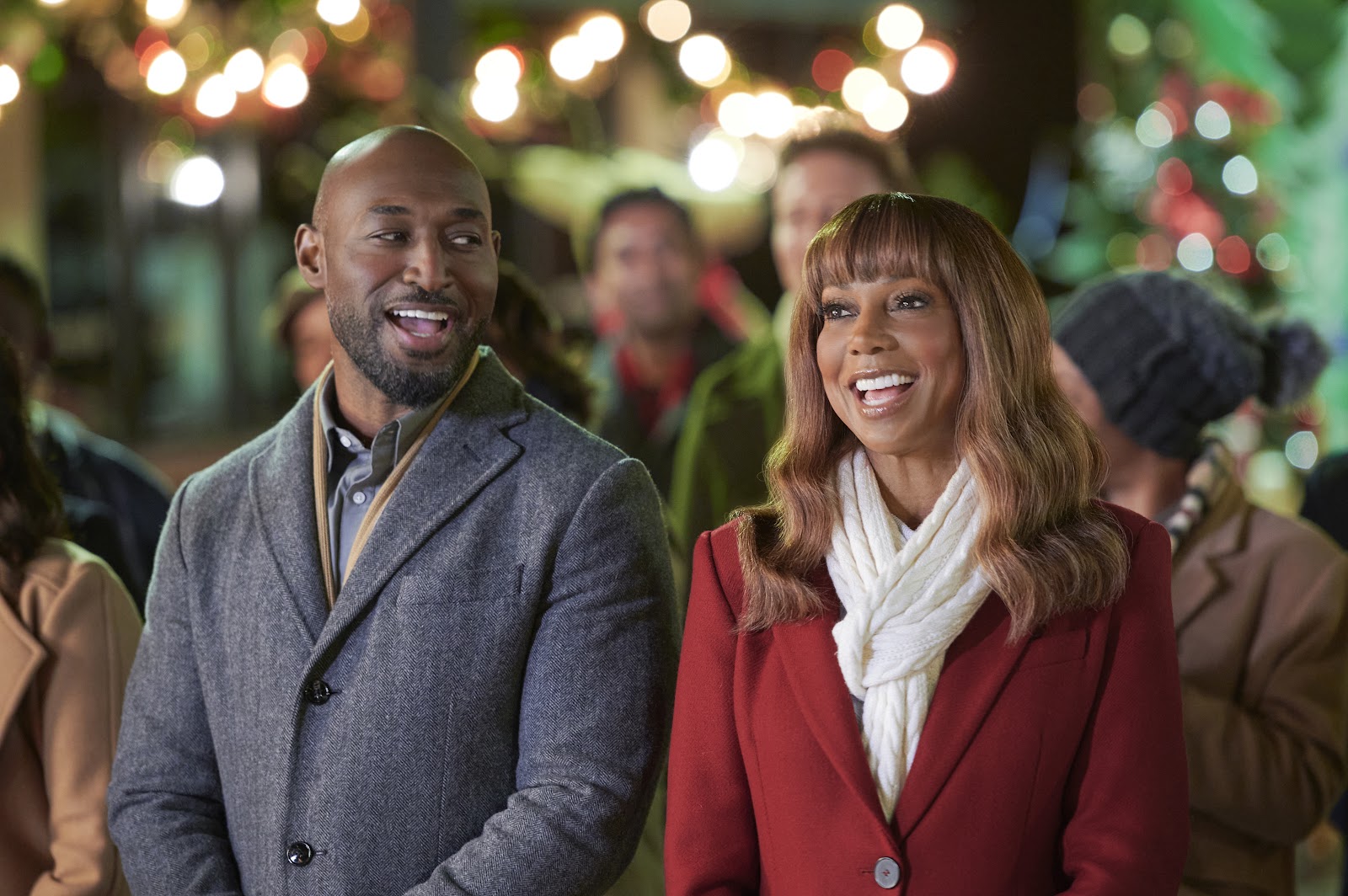 Holly Robinson Peete and Al Roker teamed up as executive producers on this “Miracles of Christmas” premiere. Peete also stars as Zoey, a traveling doctor who is assigned to a small-town clinic upstate two weeks before Christmas as the town’s only doctor recovers from surgery.

As she is charmed by the town’s colorful residents, she makes a special connection with software engineer Luke (Adrian Holmes). By the time the holidays roll around, she’s feeling at home and beginning to rethink her stance on taking short assignments that allow her to always have an exit strategy. 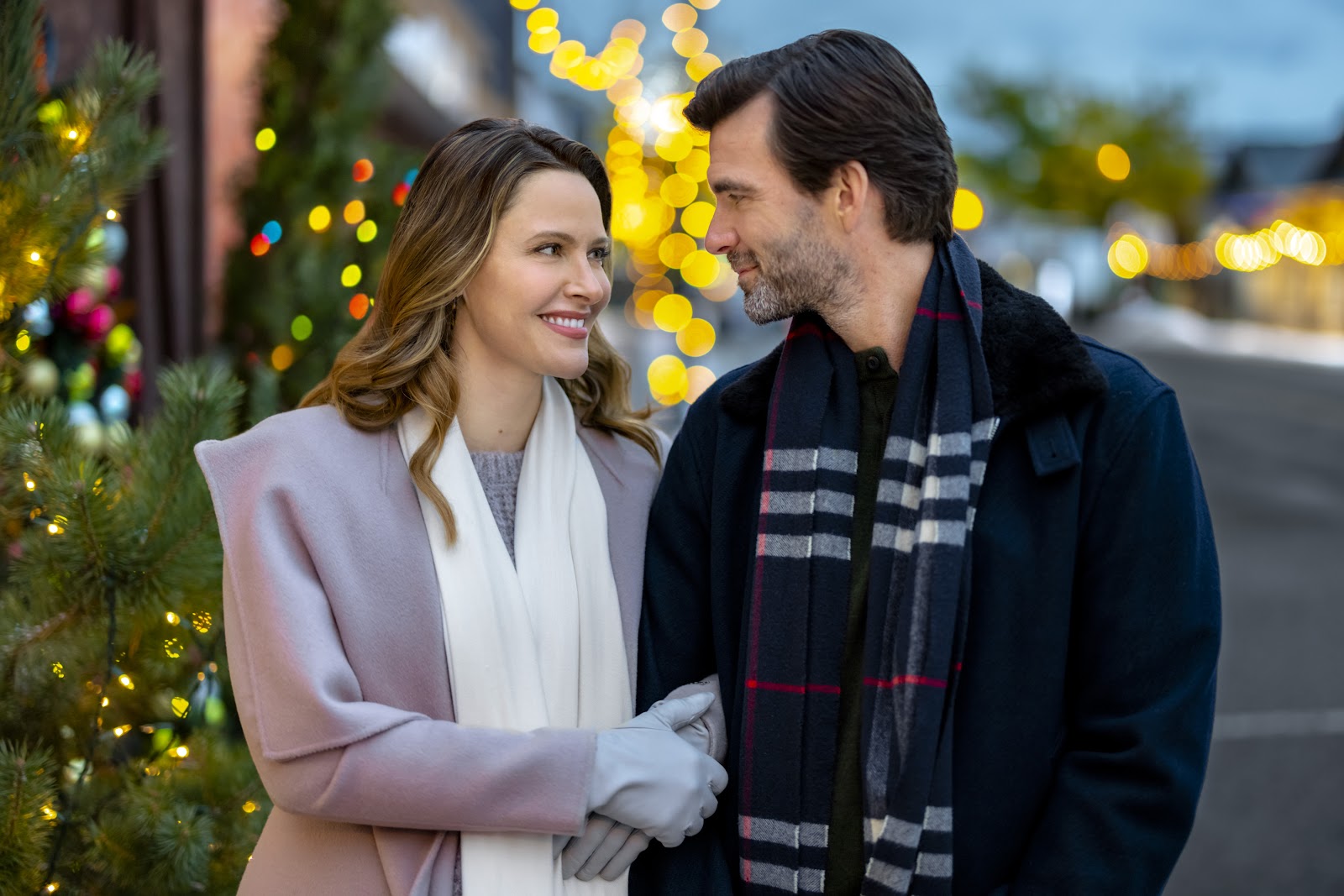 Every holiday season in Pine River, high in the mountains, the Angel Tree appears overnight in the town square. The real magic begins, however, as people write down their wishes, hang them on a tree, and a mysterious benefactor known only as “Angel” helps make those wishes come true.

Rebecca (Jill Wagner) has returned to Pine River, where she spent her childhood, as a magazine writer determined to unmask Angel. She’s also privately interested in finding out why her own wish never came true. Rebecca reconnects with her old friend Matthew (Lucas Bryant), who tries to keep her from learning the truth–even as they grow closer–because he believes in keeping Angel’s secret.

Hallmark has adapted many of bestselling author Debbie Macomber’s books, and this one is a heartwarming tale of a mother-daughter relationship alongside a traditional holiday romance. Emily (Faith Ford) wants to surprise her college-aged daughter in Boston for Christmas and arranges a house swap with Charles (Tom Cavanagh), who wants the solitude of Emily’s home in Washington State to finish his novel.

Surprises abound in this one, which begins with the fact that Heather is headed to Phoenix with her boyfriend for the holidays instead of staying on campus to study like she told her mom. Emily’s best friend is surprised to find Charles at her house, and similarly Charles’ brother is shocked to respond to a 911 call to find Emily at Charles’ condo. Could cross-country romances blossom amidst all the chaos?

This one is Freaky Friday with a holiday twist. Singer Audrey (Jackie Seiden) collides with record executive Julia (Ashley Wood Garcia) at the mall only to wake up the next morning and find their lives swapped. Audrey is a singing waitress, loving mom and wife who gave up her dream of becoming a professional singer years before but still longs to find success and be a role model for her daughter. Meanwhile, Julie is the polar opposite, rich and successful but battling a bad relationship with her own daughter.

With Christmas just around the corner, they rush to figure out how they can help each other and switch back before the holiday.

As if all the new movies this season aren’t enough, Hallmark is also showing movies from previous seasons between the premieres. The network is also making some of the catalog available on their streaming network, Hallmark Movies Now ($4.99/month, plus applicable taxes/fees, after a 7-day free trial).

There are so many Hallmark movies to watch this holiday season that Hallmark even has the Hallmark Movie Checklist App to help you track which ones you’ve watched and remind you of the ones you still want to watch. Which holiday rom-com will you check off first?

*Note: airtimes and prices referenced above may, of course, change.

Jennifer Goforth Gregory has been a freelancer for over 10 years. She specializes in technology ...

Kat Rooney is a writer based in upstate New York whose work focuses on culture, entertainment, h...